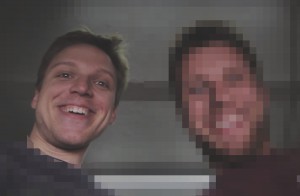 This is me. I’m a mechanical engineer. I have some idea about mechanics such as gears and materials, but I have no idea about electronics. 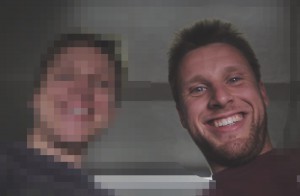 Then there’s my brother. He’s an electronics engineer.
He knows about every damn electronic component, but doesn’t really care about mechanics. 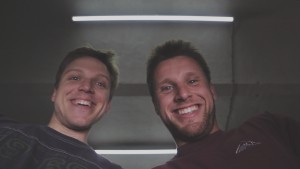 Together we bought an Arduino board. We had no idea what to use it for, so it just sat on a shelf for a while.

We never throw away a machine or device without disassembling first. We always tear it apart to the last bit and take useful things out and save it for who-knows-what-the-future-brings. 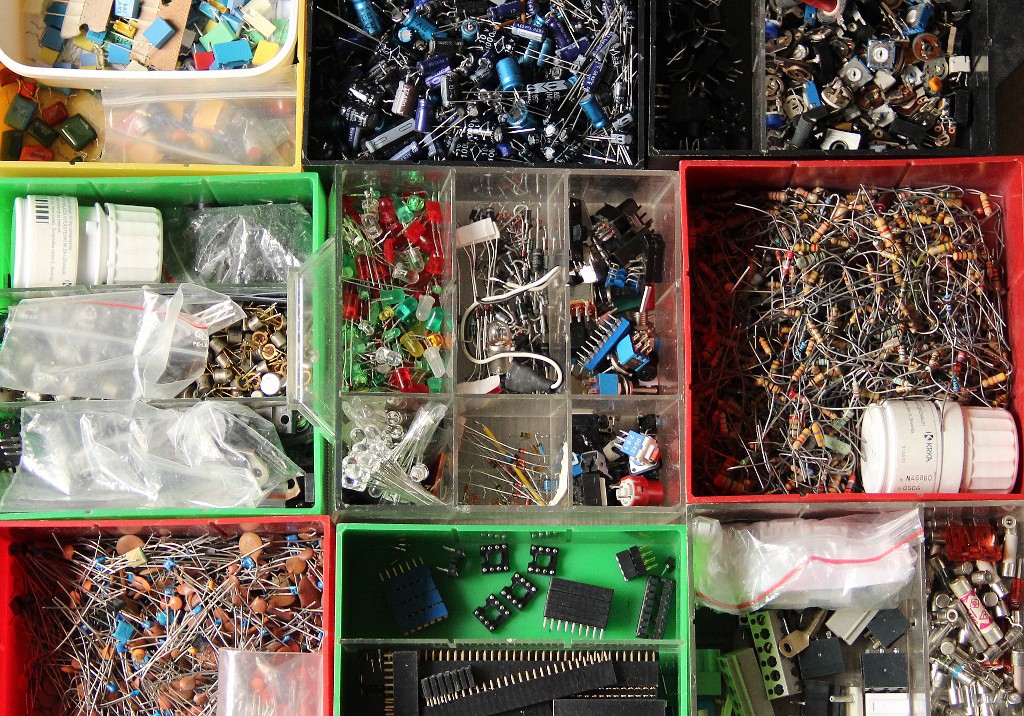 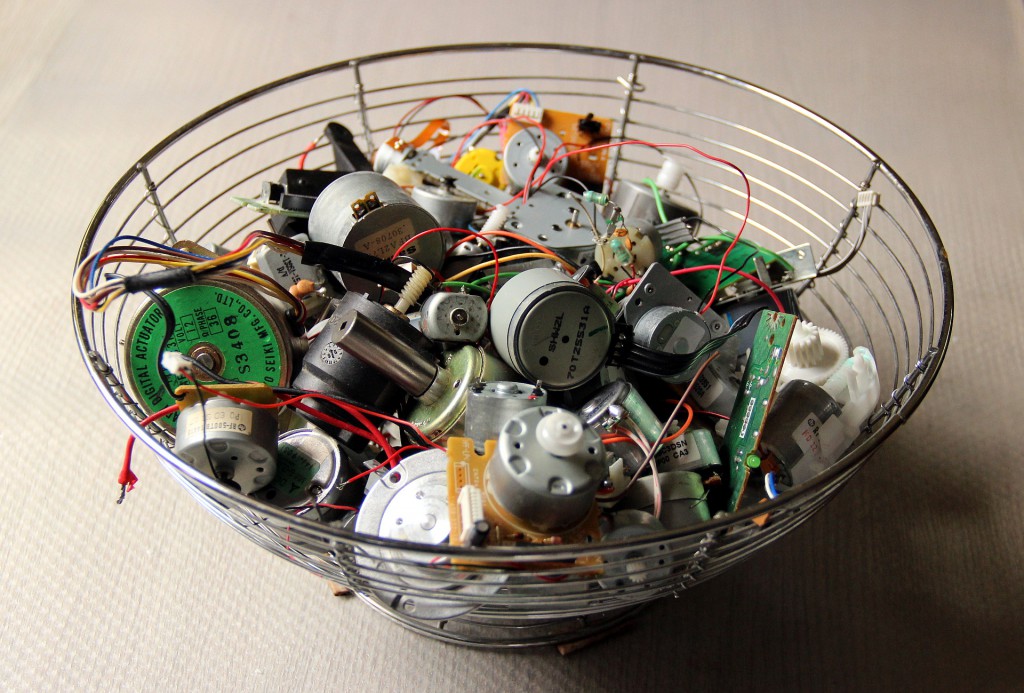 I had a few months of holidays after my graduation. I decided to do something with my motors. I had two kinds in my collection: the usual DC motors and stepper motors. 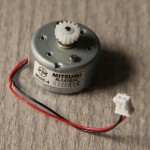 The usual motors are quite simple. You apply voltage to its poles and it rotates. You can control the speed with some voodoo electronics magic, but you never have any idea of shaft position. 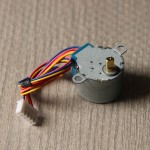 Stepper motors are more complicated. Instead of two wires, they have four or five (or more) and instead of simply applying voltage to a pair you have to choose the right pair at the right time. It’s so complicated that you need to program microcontroller (something like the Arduino we bought) to do it for you. The good thing is that every time you switch to another pair, the motor makes one step – turns by an exact angle. That means that you can control the shaft position just by counting steps.

And this is something that needs to be exploited.

Of course I wanted to create something extraordinary with my motors. Something super cool, totally new and unbelievably useful. Something like a teleport beam. Or a space elevator. Or a fusion reactor.

Then I changed my mind. Everybody is trying to do something new and cool and useful and I know only very few gadgets that exist and are that cool. So I decided to build something extraordinarily common. Like a brick. Or a clock. Or a chair. Well, I chose clocks because they move and I could put my super stepper motors to use in one.

Well, I will make sure my clock is noticed.

I decided to mess up the weary minds and weary looks poor clocks are getting all the time.

I decided to mess up the numbers on my clock. The order doesn’t matter anyway. If a pointer is pointing to a number, then this is the number you will read.

Not only that I messed up the numbers, I also messed up everything else. Like the electronics (there is a reason people use printed circuit boards). And the gears (the ones I used were very close to not being gears at all).

And I developed a ganglion while making it. Probably because I used pliers to cut and bend hundreds of wires that held components and connecting wires. It took around three months of hard work. With pliers.

I named that thing Konfyousion Clock.

The Konfyousion Clock was a hit among my friends. And everyone else I showed it to. Quite a few of them wanted to have something like that too.

I decided to make another one. Just as confused as Konfyousion, but a maybe little less messy.

It should look pretty.

The gears should be true gears. They should work well and look nice.

And I will not use pliers during assembly.

So I built a few prototypes. 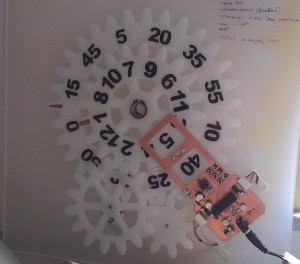 Looks like something in the right direction. But because the hands are missing, this doesn’t even look like a clock. Also the idea was to expose electronics like with the original version, but a printed circuit board never looks good. 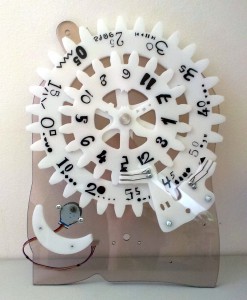 This is even messier than the Konfyousion Clock. No go.

Meanwhile, I had some time to do another clock. It’s not confused – that one was spooky. I used spare electronics and LED segment displays that would blink as if there was barely enough power… 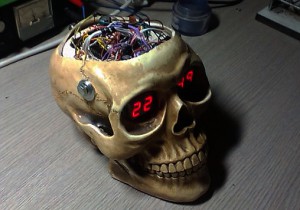 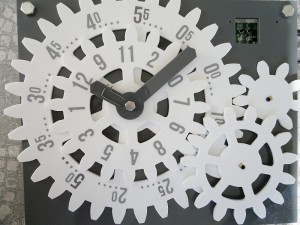 Better. Still needs to be a little fancier. 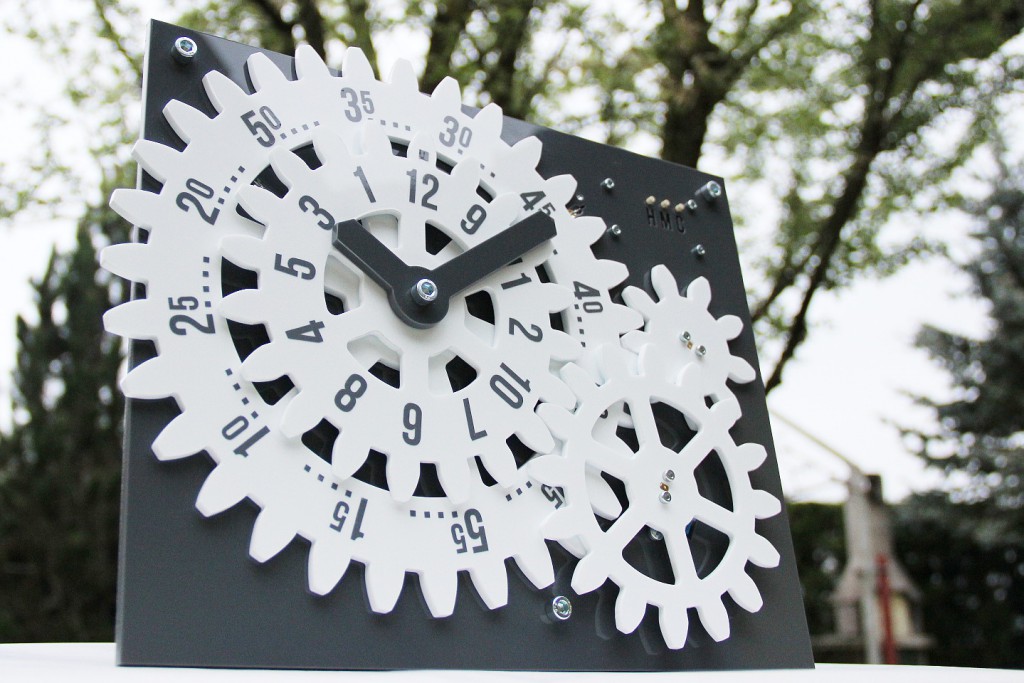 As I said, all my friends were impressed with this clock. I decided to make some more Chaotic-Tocks. Who knows, maybe we even make one for you!


Warning: sizeof(): Parameter must be an array or an object that implements Countable in /usr/www/users/damogr/chaotic-tock/wp-content/plugins/bmo-expo/classes/theGallery.php on line 136